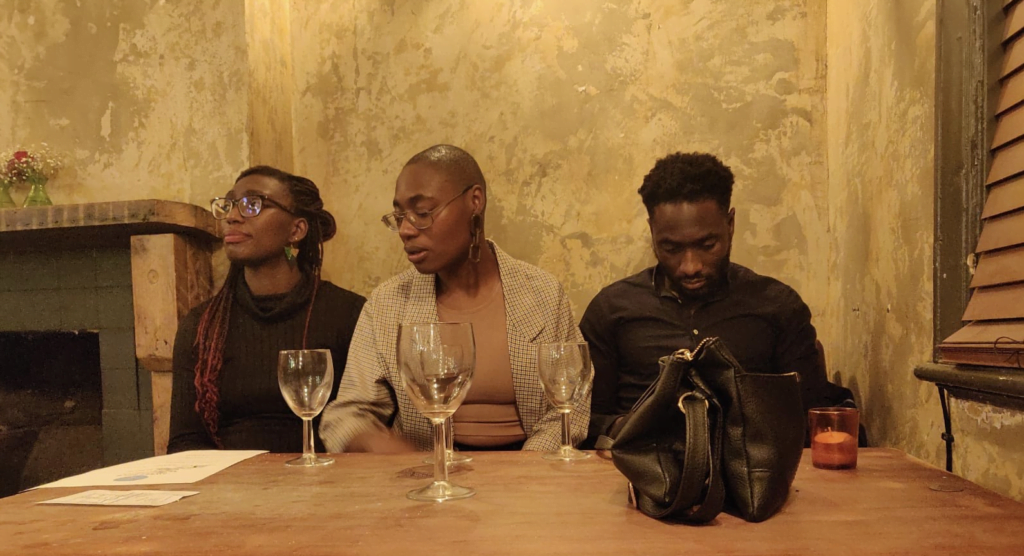 Audrey Annoh-Antwi is a London based Sommelier/ Front of House, and Be Inclusive Hospitality Ambassador. A self-described beverage enthusiast, Audrey shares with us her family ‘Generational Drinking Stories’.

This story begins with absence. Namely the very stark absence of people who looked like myself at drinks based events. One, two, three, four, five. At times this was the maximum of darker hued people I would see in a throng of bodies of a hundred and more at London wine tastings (2011 census figures state London as the most ethnically diverse region in England, with 40.2% of residents identified with either Asian, Black, Mixed or Other ethnic group).

We were all crammed in a room with tables clustered with wine bottles and a floor peppered with spittoons. Wine glasses poised in our hands ready to try samples of white, red, rose and sparkling presented by talented wine makers. We waited with eagerness to hear the precious jewels about grape variety, soils, vine age, diurnal temperature range, yeasts, ageing regimens (if any); the secrets to the magic of the liquid filling our glasses. We were all here for the same reason but why was the room so pale?

Historically some ethnic minorities groups are more likely to abstain or drink less. But once groups move their behaviours will mirror the general population and as we know Britain has a robust drinking culture. More importantly the countries that our parents came from had drinking cultures of their own; national beverages brewed from sap of palm trees, home  distilled drinks with anti-colonialism at their core, schnapps  infused with bitter herbs for medicinal purposes. Knowing that people of my hue consume alcohol across different ages, where were we?

With this in mind what follows is a miniscule history of drinking across generations presented through the lens of my friends and family. Let us begin.

Our Mother’s generation: “Alcohol is bad!”
These are the words of my mother. My mother, Agnes, is a retired social worker who arrived in the UK in 1976 from Ghana. London became her home. At no point did my siblings and I take these words to be what she honestly believed. Photographs from the late ’70s exist of mum with her contained afro, flared jeans and platform heels at house parties with beers and other drinks on the table.

“Alcohol ceased to be part of my life after I had children” said mum. So alcohol was part of her life before my big sister appeared in the early 80’s? She said there had been parties the drinks on offer would be rum & black, gin & tonic, special brew and other beers. When I asked if she drank in Ghana in her late teens: “mainly Guinness, never spirits as they were too strong”.

Gladys, a mum of a friend, came from Jamaica to London in 1964 when she was in her early 30s she is now in her late 80s. In 1964 it was still legal in the UK to refuse people service, in drinking establishments, on the basis of skin colour. For her drinking was not of much interest as she felt that tipsiness was unbecoming having observed the effect of alcohol on others. In addition being a newly baptised Christian meant drinking was not a prominent feature of her social life. However, every Christmas her daughter Angelina remembers there being Guinness punch. She recalls Guinness being advertised as more of health drink: “it was black and bitter, practically thick, almost like the bitter medicine we children were forced to drink for our health, colloquially called bitters…but with some condensed milk, a drop of Wray & Nephew Overproof rum it became a drink of creamy, silky delectability”. Angelina also recalls the drinks cabinet, that had a lock on it, only being full at Christmas and opened if anyone important was visiting.

Generation Y: prestige, the thrill of the forbidden and changing tastes

My siblings and I are children of the 80’s, my big sister born at the beginning and my brother and I around the middle. Was there anything in our collective memories about alcohol when we were young? Yes. Our mums constant repetition of alcohol being bad. More interesting is that we recalled what drinks covered the table at parties; supermalt, soft drinks, beers (generic lager and Guinness) with spirits and wine being rare. There always seemed to be a bottle of Smirnoff Vodka at funerals. For the longest time we all associated wine as both the blood of Christ and a Christmas only drink.

“I have fond memories of drinking, it always involved going out with friends and dancing, celebrating with you guys…”. Stacey, my big sister, accountant extraordinaire and mother to three delicious munchkins told me.  Her first introduction to alcohol was a sweet sparkling perry with a baby chamois as its mascot; Babycham. The love of sweet drinks was initiated from then onwards. She recalled the excitement and forbidden thrill of drinking MD 20/20 (a flavoured fortified wine based drink) from paper bags when she was in year 11. But university was where alcohol came to the fore; “I was into alcopops, like Hooch and Smirnoff which was probably my favourite drink, it went down easy, it was sweet”. Have her tastes changed? Yes, they have diversified. Nowadays her tastes have become more sophisticated (disclaimer: drinking wine will not instantly make you more sophisticated)  “I love sherry and Port … and even with red wine, I never used to be a red wine drinker but now I am finding more varieties to suit my palate”.

Ashley, my twin brother does not remember his first young encounter with alcohol warmly; a bitter lemon flavoured alcopop, “was I really keen on alcohol, hmmm, I did not see anything special about it”. He is also an accountant, very sometime-ish in his drinking habits, he developed a soft spot for rum and vodka based cocktails. His account of youthful drinking habits was surprising, “we drank alcohol just to get drunk, Lambrini, 20/20 was like a luxury flavoured and sweet”. But a significant turning point was moving to Poland for a year in 2016, for work, when he realised the nuances of vodka, “I really got to know the difference between quality vodkas and cheap vodkas, just how harsh they were on the throat…from then I have preferred more premium vodkas“. What is the next evolution for this sophisticated travelled man? “Since you have expanded your knowledge of wine I have taken more interest, one day I hope to impress you with a choice of wine”.

If apples do not fall far from trees I am the mutant apple that grew wings and flew away. Out of my siblings I am the drinks enthusiast: a sommelier doing the WSET Diploma in wine, frequenter of beer festivals far and wide, budding spirits appreciator. If anyone is tasked with bringing something nice to drink with dinner, guess what? It is me.

My sisters’ kids are still small. Her eldest, Violet, will be able to have her first drink in eight years time. Does she have any curiosity about alcohol? Of course. She has drawn pictures of her mum and I with wine bottles with her Aunty Audrey lying on the floor for some reason. At dinners where wine is poured, she will barrage us with questions typical of an inquisitive 10 year old : “why do you drink wine? What is it made of?  How did the bubbles get in there? Why is wine different colours? Why is a small sample poured into the glass? Why do you swirl the wine, is it a trend?” I am sure in time she will know all the answers and I wonder what else.